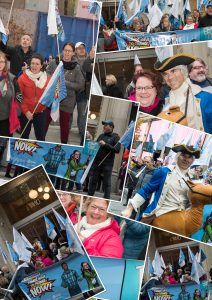 On October 18, the spokespeople in collective bargaining for the Fédération des professionnelles et professionnels de l’éducation (FPPE-CSQ) simultaneously filed sectoral demands with the employer bargaining committees and with its partners in the school system.

The demands were revealed during a joint press conference in solidarity with the Fédération des syndicats de l’enseignement (FSE-CSQ), the Fédération du personnel de soutien scolaire (FPSS-CSQ) and the Quebec Provincial Association of Teachers (APEQ-QPAT).

With regard to education professionals, the FPPE-CSQ feels that a minimum threshold for professional services, greater recognition of expertise, better working conditions and organization of work as well as a pay that attracts and retains all the resources required to offer quality public services are essential at a time when attraction and retention issues are glaringly obvious.

“Given that all stakeholders in the school system, parents and experts agree that there is a shortage of education professionals, the government must find the political and financial courage to add resources and offer terms that will attract and keep these resources in the public sector,” concluded Jacques Landry, FPPE-CSQ President.

Great start to the mobilization

The filing of sectoral demands was accompanied by mobilization actions in the city of Québec and Montréal.

Under the theme adopted for the school system’s mobilization, “In Education, Things Have to Change Now,” several union federation members met in Québec to show support for the spokespeople entering the CPN. You can read Jacques Landry’s speech pronounced during this action here.

Finally, in Montréal, the day prior to this action, an FPPE delegation set in motion the federation’s mobilization plan adopted by the Conseil fédéral de négociation. Representatives chose to escort their bargaining spokesperson to the Montréal CPN with a touch of humour. Click here to see the highlights of this action.